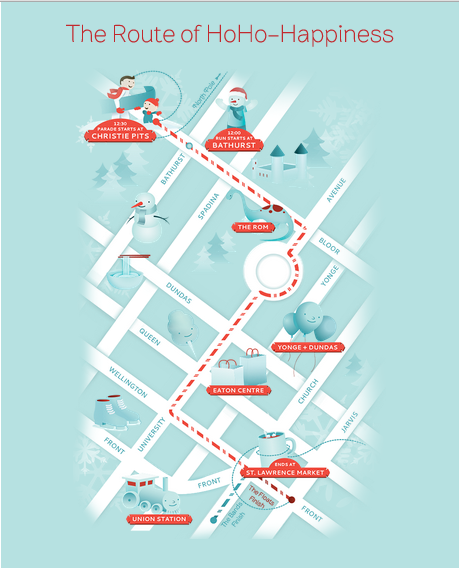 It’s amazing when, as a route planner and city walker, something like the Santa Claus Parade comes around. Not that I’m any good with kids, or crowds, and I’ve been on Santa’s naughty list more than once, but the idea of a 100+ year old tradition that covers a massive chunk of this city is lovely. Plus, it’s a great time for hot chocolate.

I grew up in Scarborough, and my parents used to fight the traffic to the core and take myself and my two sisters to the parade nearly every year when we were kids. Now, as an adult, I see more value in today’s parade than handing my letter off to Santa; instead, it’s the history of the city, and ability for a place where people come together from so many backgrounds to unite over silly things like their kids enjoying clowns and sparkles.

So: on with the history.

The Parade is 109 years old this year, and was first put on by the T. Eaton Co. (Eaton’s)  on December 2, 1905 (apparently, the weather was cold and windy).  The year before (1904) Eaton’s had installed the first escalator around the same time, and after learning how to move the people in one way, this early act of Corporate Social Responsibility was set to move them another way. The parade was more of a one-man show back then, just Santa.

The route, as describe by tayloronhistory.com,

Santa arrived by train at the city’s old Union Station, constructed in 1884 (since demolished)… Laughing loudly and waving to the assembled crowds, he stepped aboard a horse-drawn cart and journeyed from Union Station to the Eaton Store.

Eaton’s upped the ante in 1906 where Santa arrived in a coach drawn by four white horses and traveled from Union to Massey Hall, where they held a massive pageant. The official website of the Santa Claus Parade mentions a few landmarks over the years, where Santa’s parade grew. In 1913,

Eaton’s arranged for Santa to be pulled by [eight] live reindeer, which had been imported from Labrador specifically for the Parade. The reindeer had a dedicated veterinarian who looked after them and supplied their special diet of moss. Following the Parade, the reindeer retired to the property of an Eaton’s Executive outside Toronto. That year, children along the route started to march through the city along with Santa, stopping to dance and sing as they went. 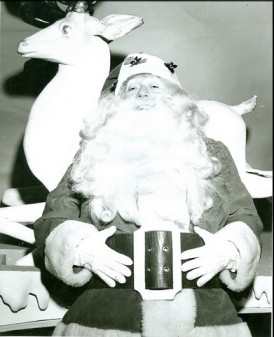 Santa from the 1900s, from the official Flickr feed

This first foray into joining Santa through marching has massive results: the concept of a Parade “float” – of only for Santa at first – became more and more elaborate: Santa traveled in a chariot, a silver fish, a real airplane ( in 1919  by the old Aerodrome on Eglinton Avenue), the caboose of a train, while over the next five years, 7 floats joined the Parade. By 1917 the Parade had a theme: initially, Nursery Rhyme Characters, a theme that has often been repeated with Mother Goose becoming a Parade tradition, taking newer more elaborate forms each year.

The parade grew and by only 1944, it was the largest in North America. Even through the war years, where elaborate costumes became paper mache heads and dresses due to limited resources,  the parade swelled.

As the parade has grown from 7 floats to peaking in 1976 with 33 floats to this year’s 22 floats, many things have stayed the same and many new traditions have started. The 30 year tradition of Celebrity Clowns tradition (which began in 1983 after 60 executives donated $1,000 each to hand out balloons) still goes on today, raising hundreds of thousands of dollars now as a force 200+ strong.

In 1985, the traditional Queen’s Park Circle lighting ceremony, now in it’s 28th year, began.  Eaton’s “Punkinhead, the Sad Little Bear”, a teddy bear who wanted to be in the Santa Claus Parade which was first debuted in 1948, lead a float carrying children from 24 countries to honour the International Year of the Child in the 1980s.

It was only in 2011 that Mrs. Claus to make her first appearance in the parade, and has since become a regular installation to the largest, and longest running Parade in the world.

For more information, check out this video: In my job I’ve heard of the terms “Greenfield Development” and “Brownfield Development” for underdeveloped rural land use and contaminated urban land use planning, but this week I read up on “Greyfield Development” in a 2007 paper from the University of Toronto. The paper defines greyfields as “large, developed sites that are due for redevelopment”. As a kid from Scarborough, I know what greyfield areas look like, and was shocked that over 5 years ago Galleria was a poster child for future solving the problem with grey.

The report describes the history of the site (Highlights mine), “The Galleria Shopping Centre was developed in the early 1970s as a single storey, enclosed mall. The mall is approximately 19,325 sq m (204,000 sq ft), surrounded by approximately 550 surface parking spaces. A McDonalds and a gas station are located at the eastern end of the site at the corner of Dupont Street and Dufferin Street. Zellers, Price Chopper, PharmaPlus and LCBO anchor the centre, supported by a variety of smaller, local tenants. On the edge of an existing residential neighbourhood, with obsolete industrial uses to the north, the site has been seen as possessing substantial redevelopment potential since the early 1980s, including being recognized in both the old Toronto Official Plan and new Toronto Official Plan as a site for a “large scale redevelopment”. Applications to redevelop the mall were submitted by the owner, Marca Development Corporation, in 2002.”

Today,  this isn’t in existence, but we’re going to pretend it is. While TorontoWalking today, we’ll be imaging what the redevelopment of Galleria, and the proposed new urban amenities for the Wallace-Emerson by spacing, would be like; what impact, improvements, and challenges face a grey region and how do we prepare for them?

More about the Galleria development plans,

For Galleria, it appears that better Master planning of the site, a clear vision (with community buy in and engagement), and strong public consultation are critical to transform this greyfield into the true, profitable, neighbourhood hub it was dreamed to be.